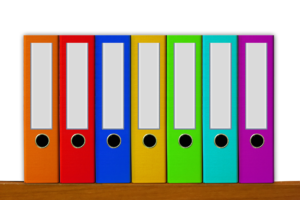 As an ADHD coach I work with many people who struggle with both organizing their stuff and getting rid of their extra stuff. Most people affected by ADHD tend to accumulate too much stuff. I am definitely one of those people. Recently I hired an organizer to help me.

The condo I live in is going on the market and I had to clear out a lot of stuff to make the place ready to be shown. I was struggling to do this by myself. The realtor suggested an organizer she often works with. To be honest I was a little skeptical because many of my clients have worked with organizers with mixed success. Usually the organizer was very helpful but after the organizer was done helping them my clients struggled to maintain their newly organized space long-term.

I have always felt that if you were going to hire a professional organizer that you should find one who would arrange intermittent follow-up sessions to help maintain your space the way you want it. So I hired the professional organizer that my realtor suggested. She and her colleagues were a great help. We cleared out a second bedroom that had turned into a neglected storage unit. Initially she said to me that the quicker I made decisions the quicker the job would be done. I feel this was really important.

Organizers usually charge based on time so before the organizer came I walked around the room and made basic decisions about what types of things I would get rid of. The room in question was mostly full of supplies from crafts and hobbies I had worked on over the years. I realized I had to evaluate realistically which crafts and hobbies I was actually still doing and which had fallen by the wayside. This really helped. Once the organizers came I still had to make decisions but the big decisions had already been done.

If you are going to hire an organizer be sure to get a quote first. This involves their coming to look at the area(s) to be organized and then sending you a quote. This is free. It is best to hire certified professional organizers who are members of NAPO. This assures that they have gone through a training program and know what they are doing. There are even organizers who have had extra training on how to work with people affected by ADHD. Upfront be as clear as possible what your goals are. For me it was to clear out my second bedroom to prepare the condo to go on the market.

It is best to hire an organizer who removes the stuff that you are getting rid of. As people affected by ADHD we struggle with follow through. Ending up with garbage bags and boxes everywhere that you have to get rid of is not a good idea. A couple of years ago I sorted out twelve boxes of books to give away or sell. Those boxes were in my place for months before I finally did something about them. The organizer I hired and her staff not only carted the stuff away but also tried to find new homes for as many of the items as possible. It was easier to get rid of stuff I knew was going to be useful for someone else. I was pleased that they found places that could use my art supplies.

Be sure to track the time the organizers are spending with you. If you have a budget you don’t want to get a surprise bill. Each time after they left I noted down the date and how many hours they spent with me. When I got the final bill not only was it close to the original estimate, it wasn’t a surprise. If you are tracking the time and the project is bigger than expected you can stop them before they go over their estimate. Also find out in advance how they take payment. If they don’t take credit cards be sure you have enough cash in your account to pay whatever method they take. In my case they took checks.

To hire a professional organizer try to get a referral from someone who has worked with the organizer before. You want someone preferably with experience working with people affected by ADHD and who is nice and patient. If you are struggling to find someone, look up NAPO’s list of organizers. Interview a few. You need someone you are comfortable with when going through your stuff. Ask for references and follow up with them.

If you can’t afford a professional organizer, try to find a friend who is highly organized and set some ground rules on how you want to work, what you want to accomplish and how much time you are willing to put in. That way the task doesn’t become unending. Be sure to do something to show your appreciation of their time and support after you all are done.