Everybody Has Something, You are Not Alone 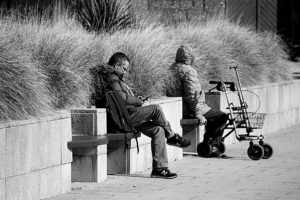 Often when I am giving a talk, I start with the fact that everybody has something. Some problem, issue, disability or other thing that gets in their way of being as successful as they wish to be. I start with this fact because we can sometimes get “precious” about our difficulties.

A great example is when you hear people trying to top each other on who has the corner market on bad or difficult things going on. Or when co-workers get into one-up-man-ship on who has the most work, worst boss and/or the least amount of time.

It is human to complain or maybe dwell a little in our difficulties. But when one starts thinking that there is some benefit to being the most burdened – compassion, listening and ownership can get lost. We can also develop a mental crutch. “Oh I can’t do that because…” or “People like me struggle more than people like you.” You don’t know you can’t do something until you try it. And you never know if someone is struggling more than you even if they don’t appear to be.

You just don’t know. I struggle with chronic pain due to surgery I has many years ago that failed and exacerbated a back condition I already had. I actually woke up from surgery and could not really walk which I had been able to do prior to the surgery. On the outside I looked fine because pain is pretty much invisible. Sometimes when I took public transportation and sat in the disability seats, I would get disapproving looks or comments about how I shouldn’t be sitting there.

This was hard because it was not as though I wished to sit there, actually I felt defeated sitting in those seats but walking to the back of the bus or metro when it was moving and standing when it was moving was extremely difficult for me.

When someone would ask if I needed help they often began comparing their difficulty with mine, “Well if you think that’s bad, I have…” I hated these conversations and would simply respond, “I am sorry you are suffering” or “I hope things get better.” Because I knew it was fruitless to get into game of woe.

Let’s be gentle with each other, compassionate and not start those games of who has it worst. If you need help – ask. If you think you can help someone – offer. But let’s lose the game of who is more “special.” We are all special and we are all struggling with something. Degree shouldn’t and doesn’t matter. There will always be someone who is worst off than you and someone who is better off than you. That’s life. Let’s focus on the positive and lose the “preciousness.”