What I Learned from David Bowie 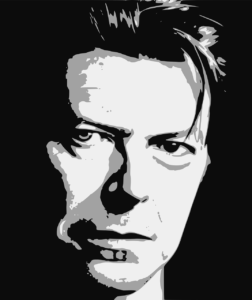 I wrote this the week after I learned David Bowie died and I was shocked at how affected I was by his death. I didn’t realize how much he had influenced my life.
Bowie helped the outsiders, the alienated feel recognized, accepted and cool. He also inspired many artists. As some of you know my previous career was as a dancer and choreographer. I always felt a little of an odd man out for two reasons. One I couldn’t learn dance combinations as fast as my peers and this caused a lot of frustration in the dance company. The second reason was that I liked the process of creating a dance or putting together a show more than actually performing the show.David Bowie was more interested in putting the production together than being on stage. Actually, when he was creating Ziggy Stardust, he was planning to have someone else be Ziggy who would lip sync Bowie’s voice. Once the production was up and performed he was done. To many of us getting to tour 18 months as Ziggy Stardust might seem like a great gig. To him it got boring.Bowie always liked doing new things, he was usually writing his next album while touring and promoting his current album. He once did 7 albums back to back. In many interviews you hear him say how he easily got bored. When recording he never did more than three takes on any one song, very few by industry standards.I always felt kind of guilty that I didn’t love performing as a dancer. I know many people who wished they could get a chance to be on stage but never would. I had the chance and did it for the experience but not out of a great need to do it. But the process of creating something was truly exciting for me. Even helping other artists create things was exciting. For me, process is a time of discovery, invention and creation.Listening to all the coverage about David Bowie’s life and death after his passing, I realized how he had impacted my life. I had a new insight. Coaching, which I think of as my second career and very different from my first career isn’t all that different. The part I really loved was creating in dance – the process. The pieces and productions that I enjoyed the most were collaborative efforts. I realized that Coaching is a collaborative effort. Instead of working toward a production we are working toward a better life. In its own way that is also a production. Another aspect I liked about creating new dance pieces was watching the dancers grow as artists. In a collaborative effort synergistic moments occur when an idea from one person would meet an idea from another person a third and new idea would be formed almost as though out of thin air.This synergy that I thought I would miss once when I retired from dancing occurs all the time in coaching sessions with clients. This is exciting to be a part of and is also a privilege to witness the person moving their life forward. David Bowie’s died on January 10, 2016. January is one of the times of the year that many people take themselves in hand and decide they want to live differently in the new year. This often means wanting to achieve new things, change old things or simply to move forward in their life whatever that means to them. January is when we decide what kind of production we are going to do for the year and what the scope of the production will be. The result being I get a lot phone calls and inquiries in January about ADHD coaching and people wanting to sign up for my services. So for me, for my production, January is exciting because it is a time when I will be meeting some of the participants of whatever production that we create that year. New clients bring new issues, new ideas and new personalities. As I said to some, I have never had the same client twice that is why my job is so exciting because each new client is a new adventure. Each year results in a different “production.”The process is always different and the results are always different. That is important for people like us with ADHD because we need to avoid getting bored. Finding excitement in “the process” will help you get things done throughout the year. Processes can be looked at as opportunities to challenge yourself to do things differently and better. This becomes more interesting, less boring, and makes new things easier to accomplish. “I don’t know where I’m going from here, but I promise it won’t be boring.”David Bowie